Ⅰ. The introduction of Time Relay

1.What is Time Delay Relay?

A Time Relay is an electrical component that is used on a circuit with a lower voltage or lower current to turn on or off a circuit with a higher voltage and bigger current or to regulate a higher voltage or larger power. The circuit's electric switch sends a control current to the relay's working coil, closing the relay and turning on or off the appropriate contact. The relay is also known as a contractor in the power supply circuit.

The Time Relay's primary function is to act as an executive device in simple program control. It begins timing when it receives the start signal. When the timing is complete, the working contacts open or close to allow the circuit to continue working. In general, the time relay's delay performance may be modified within the design range, making it simple to adjust the length of its delay time. A time relay may not be able to initiate delayed closing on its own. It will reopen after a brief period of closure. Realize the delayed closing first, then the delayed opening, but in general, by creating a set of time relays and intermediate relays. It is possible.

Time relays are a type of electric control device that uses an electromagnetic or mechanical concept to achieve delay control. The armature and pallet are drawn by the iron core and move down instantly when the coil is activated, so the instantaneous action contact is connected or separated, but the piston rod remains stationary. Because the upper end of the piston rod is attached to the rubber film in the air chamber, the lever and lever cannot fall together with the armature at the same time. The air becomes thinner, and damping causes the piston rod to steadily fall. The piston rod falls to a given position after a certain amount of time, and the delay contact action is pushed by the lever to open the moving-break contact and shut the moving-close contact. The delay time of the relay is the time between when the coil is energized and when the delay contact completes the action. By altering the size of the air chamber air inlet hole using a screw, the duration of the delay time can be varied. The relay relies on the recovery spring once the attracting coil is turned off. The restoration's function.

In many household appliances, Time Delay Relays are employed. They are electronic components that are used to turn on or off circuits with greater voltages and currents on circuits with lower voltages or currents. This relay is also known as a contractor in the power supply circuit.

Time Delay Relays are commonly used as auxiliary relays to improve the number of contacts and contact capacity in various DC or AC protection and automatic control circuits, and the delay duration can be modified freely according to needs.

Ⅱ. How many types does Time Relay have?

To obtain the time delay, the air damping time relay employs the principle of damping when the air passes through the small hole. It has three parts: an electromagnetic system, a delay mechanism, and contact. The electromagnetic mechanism is a double-port direct-acting type, with a micro switch as the contact system and an airbag damper as the delay mechanism.

The electronic time relay is based on the idea that the capacitor voltage in an RC circuit cannot jump, but can only fluctuate gradually according to the exponential rule, obtaining the delay from the resistance characteristics.

Features include a large delay range of up to 3600 S, high precision of roughly 5%, small size, shock resistance, and ease of adjustment.

Features: The delay range is large, up to 72 hours, and the accuracy of the delay can be as high as 1%. At the same time, voltage variations and changes in the ambient temperature have no effect on the delay value.

Other time relays cannot match the delay range and precision of motor-type time relays. Complex structure, enormous volume, short life, and high price are some of its drawbacks. The frequency of the power source has an impact on accuracy.

The electromagnetic time relay is built using the principle of slow attenuation of the magnetic flux after the electromagnetic coil is de-energized to delay the release of the magnetic system's armature, resulting in a delayed action contact. Its distinguishing feature is that it has a great contact capacity, allowing it to be regulated. Although the capacity is great, the delay time range is narrow. It is mostly utilized in the control of DC circuits and has a slightly lower precision.

Time relays are classified into two types based on their delay modes: power-on delay type and power-off delay type.

After receiving the input signal, the power-on delay type time relay begins to delay. When the delay is over, the execution component sends the signal to manipulate the control circuit; when the input signal is no longer present, the relay returns to its previous state. 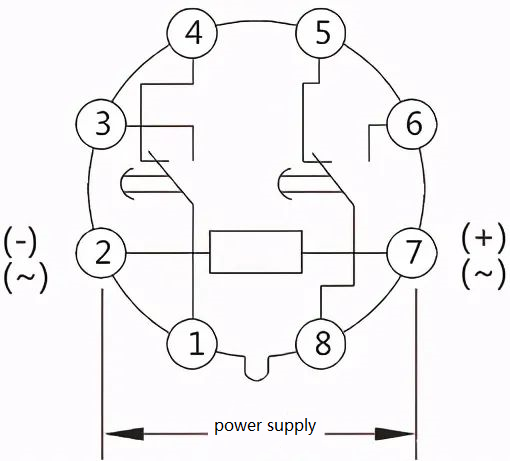 Contacts 2 and 7 are the coil terminals of the time relay and are connected to the power supply, as indicated in the diagram above. 24V, 220V, 380V, and other voltages are common coil voltages.

The outputs of two sets of relays are 1-3-4 and 5-6-8, 1 and 8 are common contacts, and 1-3 and 6-8 are normally open contacts. The contacts will operate and close after a delay. As a result, it's also known as moving contact.

Normally, contacts 1-4 and 5-8 are closed. The contacts will act and open after a delay, which is why they are also known as moving-break contacts. 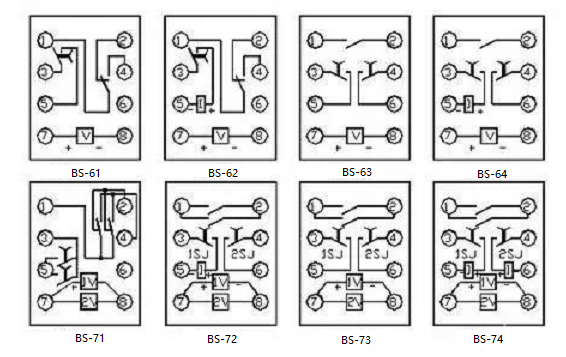 To begin, consider the control wiring as a DC relay. The numbers 3, 7, and 2, 7 are used to link 12V and 24V control voltages, respectively. When in use, the number 7 is considered the negative pole of direct current and is connected to the neutral line. 2 Connect the 220V live wire to the circuit.

Second, work control: The timer on the panel determines whether the control voltage plays a control role or not, despite the fact that it is connected.

Third, a functional understanding: it's a single-pole double-throw switch with a moving arm, similar to a standard knife switch's movable arm. The active point is 8, while the typically closed point is 5. The two are connected when the relay does not move. When travelling, the numbers 8 and 6 are linked.

The fifth principle is that when the timer is invalid, 8, 5 is connected, which is comparable to the disconnected condition of a light switch. When it works, the relay is activated, 8 and 6 are connected, and the electrical appliances are electrified to work, which is the same as turning on the light switch.

Graphical Symbols for the circuit  of Electromagnetic Relays

Graphical symbols for the contact of the time delay relay

Time Delay Relay can be widely used in automatic control circuits for time control and indication.