1. Structure: A small tubular fuse, which consists of two major parts: a tube body with metal connection terminals on both ends and a metal melt in the tube, is the most widely used in circuit overcurrent safety components. The purpose of its part of the shell is to connect and support. Most fuses have a cylindrical form, which is known as tubular, and the internal melt determines the main function.

3.Principle: When the fuse is energized, the heat converted by the current raises the temperature of the melt. The heat generated by the current is radiated and convective via the melt, the shell, and the surrounding environment when the load is normal working current or permitted overload current. The heat dispersed via conduction and conduction can gradually approach equilibrium; if the pace of heat dissipation cannot keep up with the rate of heat generation, the heat will gradually accumulate in the melt, causing the temperature of the melt to rise. When the temperature reaches and exceeds the melting point of the melt material, it will melt, cutting off the current and posing a safety hazard.

Ⅱ. Where is the car fuse in the car?

Because there are numerous parts and electronic devices on a car, each of which will be equipped with a fuse, the designer places the automobile fuses in one place at the start of the design process, which is known as a fuse box, to make future maintenance easier.

Under normal conditions, there is no need for special maintenance because the automobile fuse is located in the fuse box, but it should be remembered that if the fuse box lid that protects the fuse is destroyed, the fuse must not be exposed to avoid a short circuit. Furthermore, other materials cannot be substituted at will when covering the fuse, because the fuse box's material is completely considered for insulation and high-temperature resistance, and covering the fuse with other materials at will result in a fire hazard.

Ⅳ. How to replace the fuse yourself

How do you discover the damaged fuse when you have a basic understanding of the fuse and the car fails due to the fuse?

Step 1: Find the location of the fuse box

Step 2: Look up the fuse table to find the location of the fuse

We can locate the location of the fuse we're looking for using the fuse comparison table on the fuse box's cover.

Step 3: Find the actual position of the fuse according to the legend

We may compare the legend to the precise position map of the fuse we're looking for to identify the fuse's actual placement in the car.

The last step is to pull out the damaged fuse with the special tool that came with the automobile and replace it with a new spare fuse. There is no longer a distinction between the positive and negative poles of the blade fuse used in vehicles, therefore when replacing the fuse, all that matters is the size and amperage.

Through the fuse, you can assess the basic state of vehicle-related issues.

When we go to a 4S shop, the maintenance fee for a little fuse might cost more than 1,000 yuan, while the small fuse costs only a few pennies. This also reveals something: if the vehicle's electrical system is malfunctioning, we can check to see if the fuse is blown first. For the most common example, if your vehicle's cigarette lighter stops working, you should first check the cigarette lighter's matching fuse to see whether it is blown. If the fuse is not blown, the cigarette lighter may be problematic for other reasons, in which case you should take it to a 4S shop for repair.

Ⅴ. Why does the fuse break? 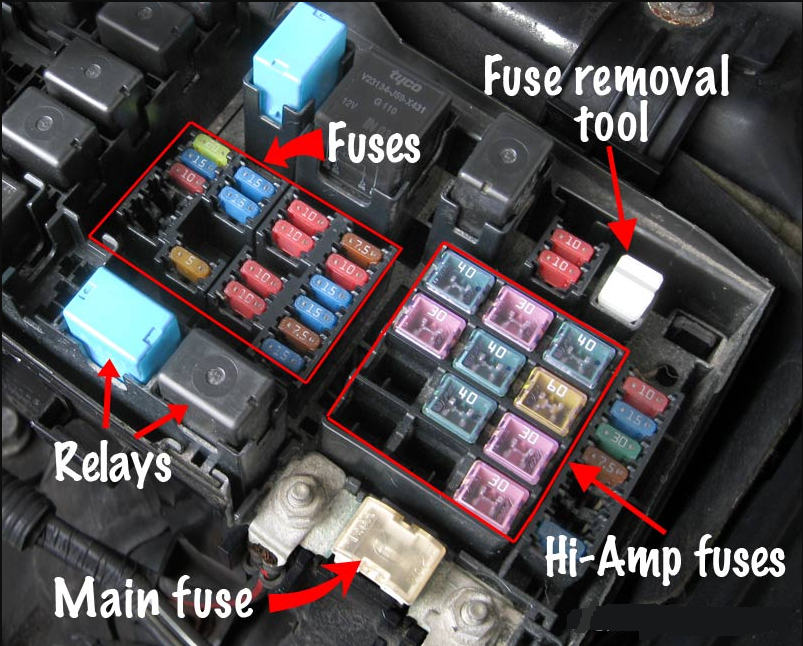 Car manufacture now has a pretty high level of craftsmanship. It is claimed that the car's circuit was thoroughly tested before leaving the factory or even at the design stage. It shouldn't be an issue, but why does the car's fuse keep blowing? When a current vehicle fuse blows, one of two things can happen: the load on the electrical appliance is too high, or there is a short circuit in the automobile circuit.

Changing headlights, automotive audio equipment, using an inferior cigarette lighter adapters, and high-power electrical appliances connected to the cigarette lighter are the main causes of increased electrical appliance load. As a result, before altering the automobile circuit, all car owners should be aware of the power and maximum load of the original car's electrical equipment. For example, if the modified headlight's power is higher than the original factory setting, the lamp fuse may be blown.

Whether the car's electrical appliances haven't been changed and the fuse has blown, check to see if the wiring has been short-circuited. It is a good habit to flush the engine compartment without using water pipes to avoid short circuits in the fuse box and wiring; additionally, you can visually inspect whether there is a short circuit caused by the aging of the wire rubber and exposed metal wires; and finally, when cleaning the car, you should avoid touching the wiring harness burs.

As previously said, if there is an electrical problem, you should first check to see if the fuse is the source of the problem. If the fuse is truly broken, we can repair it ourselves; but, when doing so, keep the following in mind:

★ The ampere value must be correct

If you need to replace a fuse, make sure you get the right amperage fuse. Increase the fuse's current specification as needed, but don't replace it with iron wire.

★ Purchase channels should be formal

Fuses can be purchased almost anywhere, however, we recommend that car owners get them from a regular 4S or repair shop. The protection of the circuit cannot be guaranteed because the unqualified fuse is likely to be made of other metals, and the inferior plastic shell is apt to burn when the fuse is overloaded and create a fire.

Without a spare fuse, how do you replace it?

In the event that you don't have a replacement fuse, you can change the fuse on other equipment that won't affect your driving or safety. If a fuse with the same current load is unavailable, a fuse with a lower rated current than the original fuse can be substituted.

What is Time Delay Relay?
What is Metaverse?