Q: What kind of pictures are the most likely to have in the future?

A: I raise two pictures, one is good, one is bad. In the best picture, we look up to the sky, there is a big and small space city. The most terrible nightmare screen is that the entire earth's surface is restored into vegetation before the industrial age, and the animals are free to run, and the birds are freely flying, but we can not see a person. There is a supercomputer in a certain cellar in a certain place, and 10 billion people live in the computer.

Have you heard the word “Metaverse” recently? Some people say that the universe is the end of the Internet.

But the word "Metaverse" has no perfect definition because the Metaverse is in a development process, not already existing.

There is a simple explanation for the Metaverse:

Metaverse is the result of the development of the Internet, a creative space for anyone who wants to create a unique experience.

Keywords are experience, space, and creativity.

The Metaverse is simple to say that the real immersion sensation can satisfy all the ideas of human beings. People can exist in an almost real unreal world and do anything include data.

In terms of concept, the Metaverse is an ultimate experience of the Internet.

From the technical statement, on the basis of traditional Internet, the Metaverse has put forward higher requirements in many aspects of the immersion, participation, and sustainability, so there will be many independent tools, platforms, infrastructure, agreements, etc. With the promotion of AR, VR, 5G, cloud computing, the Metaverse is expected to gradually go to reality from the concept.

As the scene of the movie Ready Player One, in a certain day, people can switch the identity, freely through the physical world and the digital world. They can learn, work, travel in the "Metaverse" composed of virtual space and time nodes. Metaverse, this virtual world built on the blockchain, is a decentralization platform. Players enjoy all rights and autonomous rights. Through the immersive experience, the virtual is further close to reality.

In April 2020, the American singer Travis Scott held an online virtual concert in the "Fortress Night" of Epic Game, which attracted more than 12 million players to participate. Facebook also launched a VR social platform Horizon where people can create the world. Social methods will no longer be limited to typing and voice. NetEase investment is similar to "Second Life" 3D social platform IMVU, focusing on "real social" in the virtual world using VR and 3D technology.

On March 10, 202, online game creation platform Roblox as a concept of "Metaverse", successfully landed in the New York Stock Exchange. The market value of the listing exceeded 40 billion US dollars. Tencent participated in Roblox 150 million US dollars in February 2020, and exclusively proxy Roblox China product issuance.

On April 12, 2021, Ying Weida CEO Huang Renxun announced that British Weida will lay out "Metaverse"。 On April 13, US game company EPIC Games announced a $ 1 billion financing and claimed that the financing is mainly used to develop the "Metaverse" business. In addition, the giants such as Facebook, Microsoft, byte beating are also investing in the Metaverse.

Maybe, you have heard of the Gartner curve, which is a new type of technical maturity curve, as shown below: 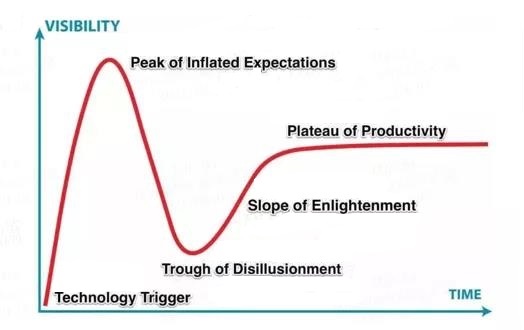 As painted in the picture, many new technologies development trends often have two rounds of a rising trend.

Various signs have shown that VR in the popular technology market has been completed the second round of heat in a few years. The maturity of the neighborhood display technology will advance more likelihood of display and immersion experience.

The technology of hardware facilities will also be further. Nvidia can be said to be the most fanatical company. The 15 seconds of the conference in the 2021 conference showed the strong technical support behind the team and the product.

The technical support and the high-quality experience of the scene make the concept of the Metaverse in achievable with significant possibilities. The attention and enthusiasm of capital also help to promote the Metaverse from the concept to reality.

Although it is still not formed, we can judge:

1, the Metaverse is essentially highly interoperable, the interactive virtual effect is realistic;

2, standardize the modules and frames of the virtual world through standards and protocols, and continuously expand the margins of the universe.

3, in the world of the Metaverse, there is an independent economic cycle system. The economic system drove the Metaverse forward.

Then, the endpoint of the terminal and the Internet - the Metaverse will have a thorough connection.

The most similarity in the concept of Metaverse is the game world!

We can boldly envision, we will have our own identity, social needs, immersion, low delay in the Metaverse, to meet synchronous and realistic experiences. Autonomy is unrestricted, and there is a diversified creative feature in the Metaverse.

As a terminal, the display moves the information and pictures from all over the world to us, narrowing the barriers between people and people, broaden the width of the acquaintance circles and the whole world. If the aircraft is a way to bring people's real distance, the display is more convenient information interoperability. People's cognition is constantly being broadening, unlocking people's curiosity. The display constructs a temperature in the middle of the virtual and reality.

The five senses are synchronized, and the layer is superimposed, and it can better achieve the human immersion experience.

In the five senses in humans, vision is the most intuitive way to explore the world. Vision is also the source of human imagination.

In addition to a digital space concept, the Metaverse can also be a physical space concept. The Internet of Things will input data, geospatial content mirroring into the metacularity, allowing us to understand, manipulate and simulate the real world in new ways. The virtual real estate of Metaverse has undertaken digital assets, and various digital art can take a lot of color in this space.

The Introduction of Car Fuse
What is speaker?