Ⅰ.The background of the third-generation semiconductor becoming the new favorite

Under high-frequency environments, third-generation semiconductors can still deliver exceptional performance and stability. They have the advantages of high switching speed, small size, and rapid heat dissipation all at the same time. When the chip area is considerably reduced, the peripheral circuit design is simplified, and the module and cooling system volume is lowered. 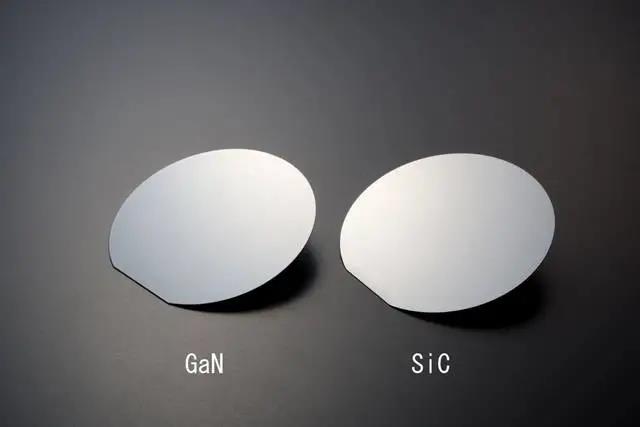 Ⅱ. SiC and GaN have their own advantages and different development areas

As the third-generation semiconductors, SiC and GaN will inevitably be compared.

Ⅲ. Similarities between SiC and GaN

The two are related since they are both broad bandgap semiconductors. In solid-state physics, the bandgap refers to the energy gap between the top of a semiconductor's valence band and the bottom of the conduction band. It indicates an energy gap, which means that a semiconductor is "the minimal energy necessary from insulation to conduction," in layman's terms.

The wide bandgap semiconductor has a very low internal resistance. The efficiency of produced components can be boosted by 70% when compared to identical silicon components. Low resistance reduces the amount of heat produced during semiconductor operation, allowing for greater power and density. Wide-gap semiconductors have a very fast turn-off time and can switch at extremely high frequencies.

Despite the fact that SiC and GaN are frequently compared, there are some significant distinctions between them. These distinctions result in their separate "best partners," or the most appropriate applications for materials.

Ⅳ. The difference between SiC and GaN

Because they are made up of numerous elements from the periodic table, silicon carbide and gallium nitride semiconductors are also known as compound semiconductors. The characteristics of Si, SiC, and GaN materials are compared in the diagram below. The basic performance parameters of electronic devices are heavily influenced by the properties of these materials.

The performance of SiC and GaN in radio frequency and switching power supply equipment is clearly superior to that of elemental silicon. These devices can function at higher voltages with fewer leakage currents because of their strong critical field. Higher operating frequencies are possible because of the high electron mobility and electron saturation speed. However, because SiC has higher electron mobility than Si and GaN has higher electron mobility than SiC, gallium nitride should eventually become the best equipment material for extremely high frequencies.

It's also worth mentioning that the ideal voltage values for these two materials are different. For medium-voltage power conversion below 48V, GaN devices with a rated breakdown voltage of roughly 100V will be employed. Cloud computing and telecom infrastructure applications are covered by this voltage range. A 650V GaN power switch will also be included in the power supply and wall socket, with a rated voltage sufficient for AC-DC and a wide input voltage range of 90-240VAC. GaN's high frequency allows the power supply's passive components to be smaller, resulting in a more compact overall solution.

SiC devices, on the other hand, are designed for 650V and greater voltages. SiC becomes the ideal solution for different applications at voltages of 1200V and higher. In the long run, applications including solar inverters, electric car chargers, and industrial AC-DC will transition to SiC. Solid-state transformers, which will eventually replace present copper and magnet transformers, are another long-term application.

SiC and GaN have slightly distinct application domains. GaN components are currently used in fields with voltages below 900V, such as chargers, base stations, and high-frequency products related to 5G communications; SiC components are used in fields with voltages greater than 1200V, such as electric vehicles, electric vehicle charging infrastructure, solar energy, offshore wind power, and other green energy power generation equipment.

Electric vehicles' present battery power systems range from 200 to 450 volts, with higher-end vehicles moving toward 800 volts, which will be the main market for SiC. However, SiC wafers are difficult to make, and the cost of source seeds for crystal growth is exorbitant and difficult to come by. Furthermore, because of the complexity of crystal growth technology, smooth mass manufacturing remains a pipe dream.

At the moment, GaN is mostly used in radio frequency devices, power electronic devices, and optoelectronic devices. The direct bandgap and spectral features of GaN are used in LED lights and lasers, among other commercial uses. Related industries have reached an advanced stage of development. Radiofrequency devices and power devices are the two main application areas that take advantage of GaN wide-bandgap semiconductors characteristics. Because 5G base stations will employ multi-transmit and multi-receive antenna array solutions, GaN radiofrequency devices have significantly decreased the power consumption and size of the entire antenna system, making 5G communications the key growth driver. 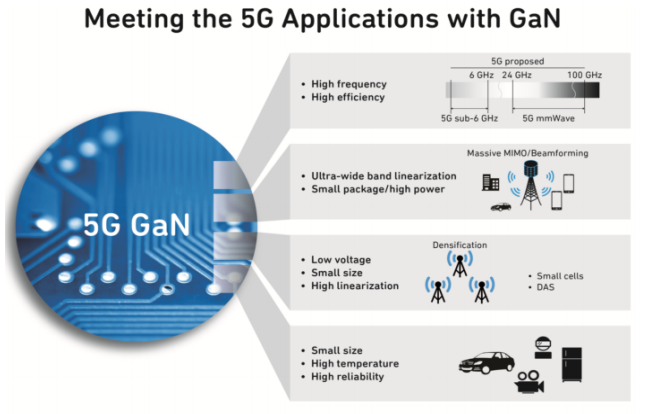 SiC: SiC has a lower switching loss in power conversion, which means it has a higher energy conversion efficiency, is easier to miniaturize modules, and has a higher temperature resistance. It's mostly employed in high-temperature, high-frequency, and high-efficiency high-power components right now. Smart grid, transportation, innovative energy vehicles, photovoltaics, and wind power are only a few examples. The key growth driver of the SiC power device industry is new energy vehicles. Power control units (PCUs), inverters, DC-DC converters, and onboard chargers are the most common application devices.

These two materials can be used to create a variety of intriguing devices. Gallium nitride is now employed in low-power, high-frequency applications, whereas silicon carbide is used in high-power, high-voltage switching power supply applications. GaN power components are a latecomer compared to SiC, which has been in development for more than ten years. As a result, despite the growth of the GaN component industry, the market is still lagging behind the former.

However, the third-generation semiconductor sector is still in its early stages of development. With the recent growth in worldwide policy support for urban infrastructure, new energy, energy conservation, and environmental protection, demand for high-performance power components like SiC/GaN is expected to rise. As a result, I anticipate that both SiC and GaN will be able to play a larger role and integrate into their respective commercial markets in the future.

Infineon, Rohm, and ON Semiconductor, in addition to STMicroelectronics, are players in the silicon carbide (SiC) business, with applications primarily in the industrial and automotive sectors. 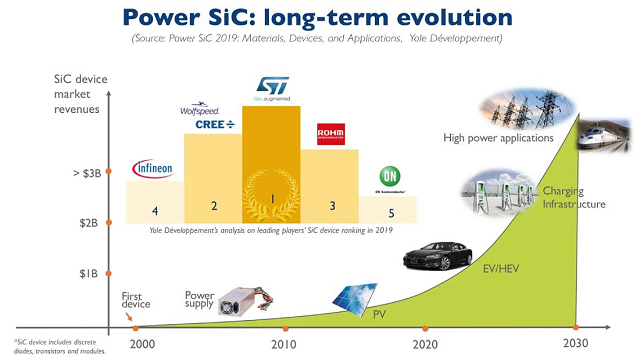 Many OEMs in the power GaN market have partnered with Taiwan Semiconductor Manufacturing Company (TSMC), X-Fab, or Episil Technologies to produce wafers.

Gallium nitride (GaN) is mostly sold to the consumer electronics sector, where it is employed in rapid chargers, for example.

Fast chargers have increased power density and efficiency requirements, however, gallium nitride (GaN) can minimize the volume and lower the price per unit of power. Fast chargers have been widely used, mostly by Chinese OEM vendors such as Navitas and Power Integrations.

The market for GaN power semiconductors is quickly expanding. The global GaN power semiconductor market was only $8.73 million in 2018, according to Yole. It is estimated that it would hit 350 million dollars by 2024, with an average annual compound growth rate of 85 percent between 18 and 24. According to optimistic estimates, GaN power adapters are used by mobile phone makers such as Apple, Samsung, and Huawei. In 2024, the global GaN power semiconductor market is expected to approach US$750 million. The market space is likely to expand if notebook computers, tablet computers, light hybrid electric vehicles, and other devices embrace GaN rapid charging. 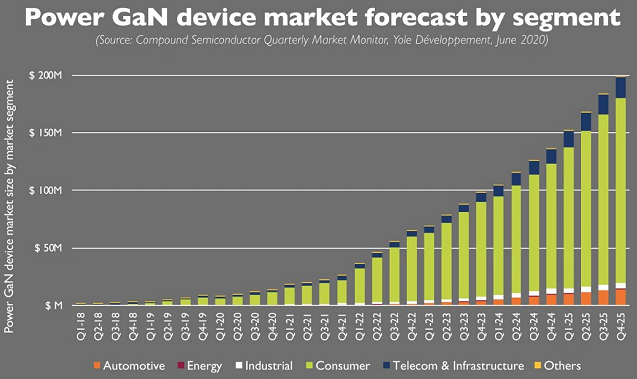 Currently, power semiconductor devices in electric vehicles are mostly Si-based, however, new SiC power devices offer significant performance advantages. SiC modules, rather than Si modules, can be used in the design of DC/AC inverters to considerably lower the weight and size of the inverter while also conserving energy. The weight of the SiC module inverter can be lowered at similar power levels. By reducing the size by 43% and the switching loss by 75%, the size can be lowered by 6kg.

SiC power devices' minimal weight, high efficiency, and high-temperature resistance help to effectively lower the cost of modern energy vehicle systems. Consider the SiC power module, which was originally installed in the Tesla Model 3 in 2018. Its lightweight qualities help electric vehicles save inside space, while its high-efficiency features help electric vehicle batteries cost less. High-temperature resistance (up to 200 degrees) The qualities of work) minimize the cooling system's requirements and lower cooling costs. Despite the fact that the use of SiC power devices increased the original cost by roughly $300, the foregoing enhancements can save you money. Overall, the adoption of SiC power devices has resulted in a profit of almost $1700.

According to Infineon's projection, the penetration rate of SiC devices in new energy vehicles would continue to rise, rising from 3% in 2020 to 20% in 2025. According to the International Energy Agency (IEA), in the framework of sustainable development, the worldwide number of electric vehicles would expand from 7.2 million in 2019 to 245 million in 2030, with an average annual growth rate of more than 36%. Automotive SiC power devices are predicted to be in high demand as a result of the two considerations mentioned above.

What is an LTPO Display?
What is Cloud Storage?